by newsrantz
in Movies & TV
0

This is a problem. Its a real problem. Its not the biggest problem we have right now, Ill gladly concede that much, but still, the point stands: Once you hear the song Ja Ja Ding Dong from Eurovision Song Contest, the new Ferrell-McAdams movie that is burning up Netflix, you will have an impossible time getting it out of your head. It burrows in there with its little teeth and claws and hooks itself to particularly sturdy parts of your brain. Its not so much an earworm as it is an eartick, holding on for dear life as you try to pluck it out of there. Luckily, I am here to help. I, too, suffered this fate, living with Ja Ja Ding Dong lodged into my brain for days on end. And I have a simple, easy tip for getting it back out as soon as youre ready.

Ill get to that in a minute, though. The first thing you need to know is that they did this on purpose. Everyone involved openly admits it. The writers of the song, Gustaf Holter and Christian Persson, said as much, telling Vulture they wanted it to be super-cheesy, but also incredibly catchy at the same time, and adding stupid-catchy, we call it. Well, my friends and tormentors, you did it. Congratulations. 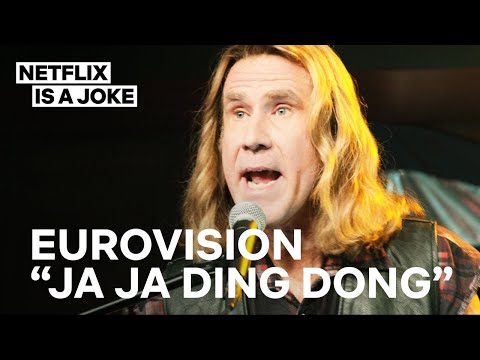 I think there are two parts to its catchiness. The first is the call-and-response of it all. It sounds like a real song youd hear in a real pub in real Iceland, with its Ja Ja prompt followed by its DING DONG chant. This is the chunk of it that really gets in there. I bet, if you live in a bustling city or along the main drag in a smaller town, you could stick your head out the window right now and shout Ja Ja! and at least one person would shout DING DONG back at you. If it doesnt work today, give it a week. If it doesnt work in a week, try yelling WILL YOU PEOPLE PLEASE WATCH THE EUROVISION MOVIE ON NETFLIX! COME ON! Its a good movie. Its fun. They will thank you. Eventually.

The second part of its catchiness is the naughty lyrics. Hoo boy, are they naughty. Not since Lets Duet from Walk Hard has a fun and peppy little fake movie song made the 11-year-old child in me chuckle this much. I mean…

The song itself sounds so sweet and innocent that you can almost be lulled into a trance where you forget how dirty the lyrics are. It could be an issue if you have children who are, say, 8 and 11 years old and hear it one single time. This brings us to a quote from the director of the film, David Dobkin, also from the Vulture piece: I played it one time in my house one time! and my 11-year-old and 8-year-old were singing it for weeks.

It is very funny to picture two young children being as obsessed with the song as this bearded maniac, a tortured soul and my favorite character in this movie, possibly any movie.

I can relate to this man. Anyone who has seen the movie can. There are other goods songs in there, too. Double Trouble is legitimately fun and bouncy, and could have been the for real song of the summer in that small late-90s slice of time when Ace of Base owned the charts. Volcano Man is preposterous on every level and still might end up on multiple playlists I listen to in my car. This is one of the reasons Eurovision Song Contest works as a movie, and it’s the same reason that Walk Hard and Popstar worked as music biopic satires: The humor lands better when the songs are good. These songs are good. All of them. But I only want to hear Ja Ja Ding Dong.

This brings us, finally, to the simple trick Ive discovered to get the song out of your head. Youre going to kick yourself when you realize how easy it is. All you need to do it sit in a quiet spot in your home, close your eyes, and th-

IT STAYS THERE UNTIL IT WANTS TO LEAVE

YOU DO NOT CONTROL JA JA DING DONG

SING IT WITH ME

LISTEN TO MY SWEET FURIOUS BOY

Travel: Experience Breathtaking Aquatic Splendor on the Island of Tahiti

Laetitia Mugerwa: The Education & Emancipation of Women is Not a Threat to Your Manhood

Anderson .Paak Left Kanye And Dr. Dre To Be On The Price Is Right

The Last Remaining Blockbuster Is Now An Airbnb Listing