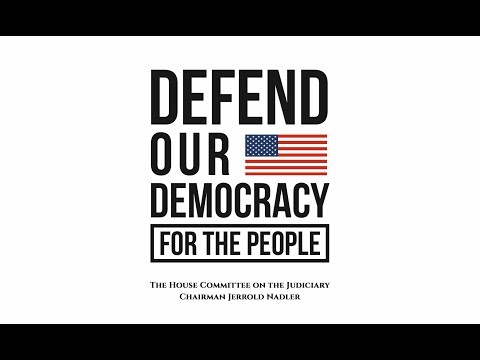 Harvard law professor Noah Feldman told lawmakers that Trump, by “corruptly soliciting” Ukrainian President Volodymyr Zelenskiy to open an investigation of one of his chief 2020 Democratic rivals, former Vice President Joe Biden, “has clearly committed high crimes and misdemeanors,” the standard set in the U.S. Constitution for impeachment of a president.

Pamela Karlan, a Stanford law professor, said a U.S. president should resist foreign intervention in an American election, not invite it. She called Trump’s request to Zelenskiy an “especially serious abuse of power.”

In his opening statement, University of North Carolina law professor Michael Gerhardt told the House Judiciary Committee, If Congress fails to impeach here, then the impeachment process has lost all meaning, and, along with that, our Constitutions carefully crafted safeguards against the establishment of a king on American soil. No one, not even the president, is above the law.”

Republicans supporting Trump called Jonathan Turley, a George Washington University law professor who said he voted against Trump in 2016. But Turley said there was a “paucity of evidence” supporting Trump’s impeachment and “abundance of anger” by Democrats aimed at removing Trump from office. Turley said Trump’s late July call with Zelenskiy was not “perfect,” as Trump has contended, but not grounds to impeach him.

The Judiciary panel’s hearing was the next step in House Democrats’ effort to impeach the country’s 45th president, only the fourth time in the country’s 243-year history that a U.S. leader has faced a formal impeachment proceeding.

The constitutional scholars recalled the history from more than two centuries ago when the country’s founding fathers wrote into the Constitution that presidents could be impeached and removed from office if lawmakers decide they have committed “treason, bribery, or other high crimes and misdemeanors.” Feldman, Karlan and Gerhardt all said that Trump had met the criteria for impeachment laid out in the Constitution, describing his actions as an “abuse of power.”

Feldman said if Trump is not held to account for his alleged offenses, “We no longer live in a democracy.”

Turley called the case against Trump “the narrowest impeachment in history” and was being conducted by Democrats in an “incredibly short” period of time. The lead Republican on the Judiciary panel, Congressman Doug Collins, asked, “Why the rush?”

Collins accused Democrats of trying to complete the impeachment process before the country turns its attention to the congressional and presidential election campaigns in 2020, when Trump is seeking re-election. Trump’s lawyers declined an invitation to participate in Wednesday’s hearing, while retaining the right to appear at any later sessions in the coming weeks.

The Trump impeachment drama centers on Trump’s late July request to Zelenskiy to “do us a favor,” the investigation of Biden, his son Hunter’s work for a Ukrainian natural gas company and a debunked theory that Ukraine meddled in the 2016 U.S. election that Trump won, not Russia, as the U.S. intelligence community concluded.

At the time, Trump was temporarily withholding $391 million in military aid Kyiv wanted to help fight pro-Russian separatists in eastern Ukraine. Trump eventually released the assistance in September without Ukraine opening the Biden investigations, proof, Republicans say, that there was no quid pro quo, an exchange of favors between Trump and Ukraine.

But the Democratic-controlled House of Representatives could on a simple majority vote impeach Trump before leaving on a Christmas week recess at the end of December, setting up a trial next month in the Republican-majority Senate, where a two-thirds vote would be needed for conviction to remove Trump from office.

Two former U.S. presidents — Andrew Johnson and Bill Clinton — were impeachedbut not convicted by the Senate and removed from office, while a third — Richard M. Nixon — resigned in the face of certain impeachment. Many constitutional scholars believe abuse of office and obstruction of Congress by withholding documents as it investigates a president are also impeachable offenses, but the U.S. Constitution makes no specific mention of such offenses.

Trump has assailed the impeachment effort targeting him, saying he is blameless in his request for investigations that would have benefitted him politically. While he is in London for NATO meetings, his political campaign complained that the majority “Democrats will get THREE constitutional lawyers and Republicans will only get ONE!” at Wednesday’s hearing. “This entire process is unfair to not only @realDonaldTrump, but the American People!”

Tomorrow, Democrats will get THREE constitutional lawyers and Republicans will only get ONE!

This entire process is unfair to not only @realDonaldTrump, but the American People!#StopTheSchiffShow pic.twitter.com/gDfqHco5vo

The new testimony comes a day after the Democratic-controlled House Intelligence Committee released a 300-page report accusing Trump of “misconduct” in seeking Ukrainian political interference in the 2020 presidential election and then relentlessly trying to obstruct Congress as it carried out an inquiry into his actions.

The nearly three-month impeachment inquiry has found that President Trump, personally and acting through agents within and outside of the U.S. government, solicited the interference of a foreign government, Ukraine, to benefit his reelection, the report stated.

In doing so, the president placed his own personal and political interests above the national interests of the United States, sought to undermine the integrity of the U.S. presidential election process, and endangered U.S. national security, the report declared.

A Trump defender, House Republican leader Kevin McCarthy, rebuffed the claims, saying , “House Democrats have been trying to undo the results of President Trump’s historic election since before he was sworn in.” He said Democrats have not found “a single legitimate reason” for impeachment.

“Instead, Democrats have relied on smears, hearsay, and presumption to build their false narrative,” he said.

‘You dey craze’ – BBNaija ex housemate Ike blasts a follower for saying his babe, Mercy is not fine – Kemi Filani

Kanye West Has Reportedly Filed A Trademark For West Day Ever