Protesters smashed windows in a subway station and a shopping mall Sunday and police made arrests in areas across Hong Kong amid anger over a demonstrators death and the arrest of pro-democracy lawmakers.

Hong Kong is in the sixth month of protests that began in June over a proposed extradition law and have expanded to include demands for greater democracy and other grievances. Activists complain the government is eroding the autonomy and Western-style civil liberties promised when this former British colony returned to China in 1997.

Authorities closed the subway stop in the Sha Tin district in the northeast after protesters broke windows and damaged a ticket machine. Reporters saw police arrest three men at a residential complex elsewhere in Sha Tin but the reason wasnt clear.


In Tuen Mun in the northwest, about three dozen people dressed in black, the symbolic color of the protests, stormed through the Citywalk shopping mall. Most were peaceful but one used a club to smash windows while others overturned tables in a restaurant. Spectators on the street outside shouted Cockroaches! at police.

In Tsuen Wan in the west, police fired tear gas and took away four men and one woman suspected of vandalizing shops, the newspaper Apple Daily reported.

Inside the Festival Walk shopping mall in Kowloon Tong, reporters saw a man lying on a public walkway beside a small pool of blood with police standing over him. His condition and the reason for possible injuries were unclear.

1:02
Makeshift memorial erected in Hong Kong for student activist who died from fall

There were brief shoving matches between police and shoppers, some of whom thrust their fists into the air in a gesture of defiance. Police pointed cans of pepper spray at spectators and reporters.

The protests have added to downward pressure on Hong Kongs economy. It already was struggling with declining global economic growth and the U.S.-Chinese tariff war.

The territory of 7.5 million people tumbled into its first recession since the global financial crisis after economic activity shrank 3.2% in the quarter ending in September.


On Saturday, police announced the arrest of six lawmakers on charges of obstructing the local assembly during a raucous May 11 meeting over the extradition bill. All were freed on bail.

Meanwhile, protesters mourned the death Friday of a university student, Chow Tsz-Lok, who fell from a parking garage when police fired tear gas at protesters.

The circumstances of the death are unclear, but many accuse police of using heavy-handed tactics, including widespread use of tear gas and pepper spray. Police denied pushing the 22-year-old student during last Mondays incident or delaying emergency treatment.

Hong Kong is preparing for district council elections Nov. 24 that are viewed as a measure of public sentiment toward the government.

Pro-democracy lawmakers accuse the government of trying to provoke violence to justify canceling or postponing the elections.

Violence erupted late Friday when protesters took to the streets following memorial events for the student in multiple locations.

There have been only a few fatalities during the unrest, including some reported deaths by suicide and a man who fell to his death while hanging pro-democracy banners on a building.

More than 3,300 people have been arrested since the start of the protest movement.

BBNaija’s Uriel Attacks Fan For Pressuring Her To Get Married 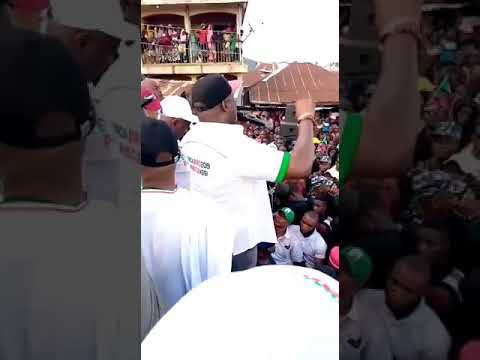 I Am Better Than Yahaya Bello In Mattress: Melaye (Video)

Bolivia to hold fresh elections after damning report on vote-rigging

VIDEO: United Nations reacts to viral video of staff having sex in public, inside official car

Iran to announce nuclear facility incident’s cause at ‘appropriate time’